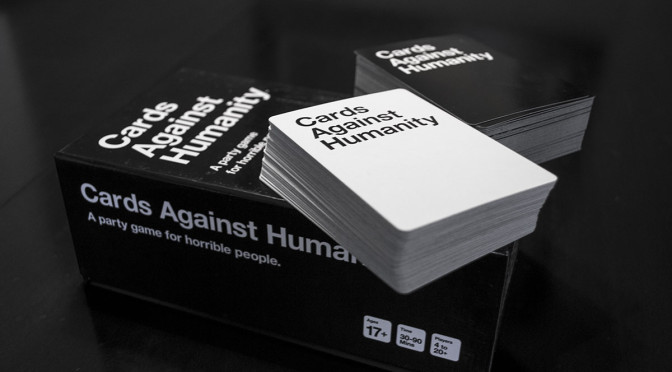 Crowdfunded Game With A Big Claim

So I saw this come across the feeds today, an Indiegogo funded game that claims the people who have played the Beta Test say “It’s better than “Cards Against Humanity“. I’m dubious. For all the copy on the games fundraising page, the only way to figure out how the game is played  is to watch the promo video. The game is called “Crazy Mix ‘Em Ups” and it looks like a cross between a college drinking game and the “Dare” part of “Truth or Dare”. Some of the challenges on the cards were “>Blank< and >Blank<, switch tops.” or “>Blank< play the rest of the game topless.” or “Everyone make a tinfoil hat.” The video includes lots of pictures of young men and women playing the game in their underwear and drinking shots presumably playing the game.

Better Than “Cards Against Humanity”?

Here’s why I doubt the better than CAD claim; I don’t think a game like this will have the same mass appeal. Where CAD allows you to say horrible, politically incorrect things in the frame work of the game, it’s quite a threshold to cross to reach the point of actively doing the physical act described on a card. Last holiday season my wife and I went to a house party thrown by her boss (who was a V.P.) with co-workers and spouses, and we played Cards Against Humanity and were coming up with completely inappropriate combinations for the black cards, but everyone had a blast, because the game gives you license to do so. I don’t see that scenario playing out with this game, no matter how much the game gives you permission to act out, it’s a big step to cross the line from verbal to physical.
I don’t know, maybe I’m just a grump, but check it out and comment below with your thoughts.